Prosecutors worked to break down his version of events. He admitted some of his decisions were "bad police work." He also admitted he did not announce he saw a gun before he fired and failed to tell his partner he saw a gun when they went into the home.

FORT WORTH, Texas - Former Fort Worth police officer Aaron Dean said he wanted to testify in his own defense as he faces a murder charge for shooting and killing Atatiana Jefferson in 2019.

Dean was the first witness called by the defense team on Monday morning. When asked why he waived his Fifth Amendment rights Dean said, "This jury needs to hear from me, and hear the truth."

Dean told the jury he thought the house was burglarized and claims he found himself staring down the barrel of a gun.

Prosecutors worked to break down his version of events. He admitted some of his decisions were "bad police work." He also admitted he did not announce he saw a gun before he fired and failed to tell his partner he saw a gun when they went into the home.

His defense team's questioning began with his background and lead up to Oct. 12, 2019, the night of the open structure call and fatal shooting that left Atatiana Jefferson dead. He spoke about arriving at the home with fellow officer Carol Darch and approaching the open front and side doors.

"I could see objects just strewn all over the floor. It looked ransacked. It was a mess," Dean said.

[ATTORNEY: "What is going through your mind at this point?"]

"That we had a possible burglary at that time," Dean responded.

Dean said they moved along the east side of the home and quickly checked two vehicles and the detached garage before opening the backyard gate and a window.

"As I looked through that window, low in the window, I observed a person. Couldn't tell Black, white, male or female," Dean said. 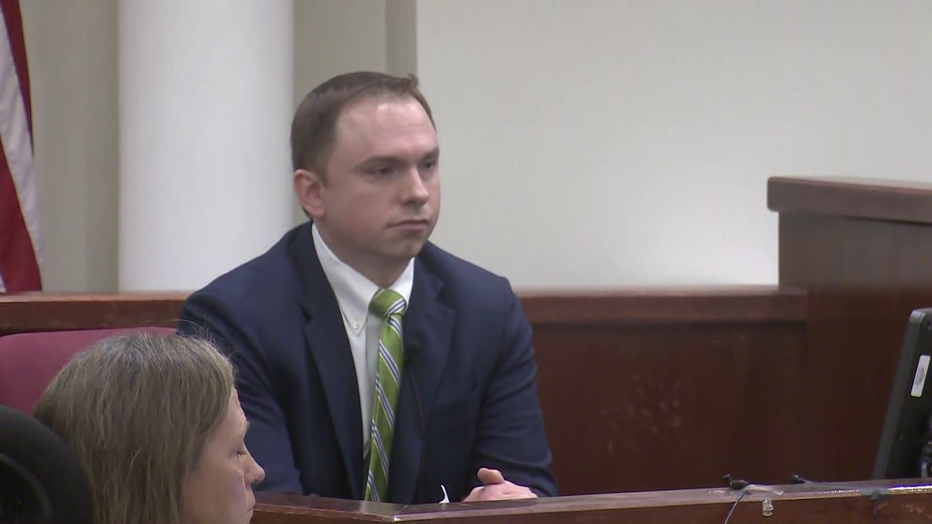 [ATTORNEY: "This silhouette, were they near the window or away from the window based on what you could see at the time?"]

"I looked back after I got my light on and saw the silhouette again. And I was shouting at this time, shouting commands, ‘put up your hands, show me your hands!’ And as I started to get that second phrase out, ‘show me your hands' I saw the silhouette. I was looking right down the barrel of a gun and when I saw the barrel of the gun pointed at me, I fired a single shot from my duty weapon, and immediately had the flash from the muzzle reflecting off the window and as my weapon recoiled the light was bouncing back in my face, so I couldn’t see. When my vision cleared then I observed the person we now know was Ms. Jefferson. I heard her scream and saw her fall like this. I knew that I’d shot that person."

Dean, a former Fort Worth police officer, admitted to "bad police work" multiple times while on the stand Monday. Dean is facing a capital murder charge for the shooting and killing Atatiana Jefferson in her mother's home in 2019. Dean said he believed the house was being burglarized.

On cross-examination prosecutor Dale Smith aggressively questioned Dean about what he saw and why he never told his partner he'd seen a gun.

[SMITH: "You couldn’t even tell if she had the gun extended out and pointed at you?"]

Former Fort Worth police officer Aaron Dean answers questions from prosecutors about what happened on the night of the shooting of Atatiana Jefferson in Oct. 2019.

[SMITH: "If in your head what’s going on there’s this burglary in progress and bad guys are in there with guns, you let your partner walk into that house without giving her any heads up whatsoever, that the bad guy might have a gun, is that really what you did?"]

Dean:  "We were talking on the radio shouting commands."

Prosecutors argued that Dean's decision against announcing his presence as Fort Worth police contradicts his decision to use a flashlight, which could have been seen by anyone in the house.

Dean: "Because I thought there was a burglary."

[SMITH: "You didn't announce yourself as Fort Worth PD, did you? You just used your flashlight correct?"]

Dean: "No, I just used my flashlight."

[SMITH: "And whoever was in that house had no idea, did they?"]

Before he left the stand, the prosecution asked Dean to grade himself from A to F on the job he did as an officer that night three years ago.

[SMITH: "B, a high passing grade. What did you do best?

[SMITH: "You gave yourself a B, and you can’t tell the jury what you did best in that minute and 17 seconds?"]

After Dean testified, the defense called a forensic video analyst, to the stand. He testified that Dean could see more than the body camera showed.

But there was a key moment under cross-examination when the defense witness was asked about how quickly Dean fired at Jefferson after starting to tell her to put her hands up. The expert witness says it was just over half a second.

Dean is charged with murder, but court observers said it’s possible the jury could also consider the lesser charge of manslaughter.

The state rested its case against Dean on Wednesday after two and a half days of testimony.

Many people watching the trial had expected the prosecution to spend more time building its case against the former Fort Worth police officer.

In October 2019, Dean was responding to a call about suspicious open doors at Jefferson’s mother’s home. He shot through a back window, killing Jefferson inside the house.

The defense said Jefferson pointed a handgun in Dean’s direction and argued he acted in self-defense.

The state's final witnesses in Dean's trial testified about the crime scene, followed by Atatiana Jefferson's sister. The defense will begin to lay out its case on Monday.

The prosecution is trying to convince jurors that Dean never saw a gun. The state said he failed to follow proper police protocols in the way he responded to the situation.

After the defense presents its case, the prosecution will have a chance to call rebuttal witnesses.

If convicted of murder, Dean faces a possible sentence anywhere from five to 99 years in prison.

FOX 4 will have gavel-to-gavel coverage on Fox4News.com and our YouTube page, plus live updates from the courtroom throughout the day.

Atatiana Jefferson was babysitting her 8-year-old nephew at her mother's house.

A neighbor made a non-emergency call to police because a door was open with lights on.

Officer Dean arrived, walked into the backyard and saw Jefferson in a window with her gun in her hand. Dean yelled, "put your hands up! Let me see your hands!" before immediately firing a single shot, killing Jefferson.

The shooting led to protests against the Fort Worth Police Department.

If you have issues viewing the timeline click here.