Rabies is a preventable viral disease most often transmitted through the bite of a rabid animal.

People who become infected with rabies are few and far between.

The U.S. Centers for Disease Control and Prevention reported that between 1960 and 2018, only 127 human rabies cases were recorded and about a quarter of those cases resulted from a dog bite abroad.

In the U.S., approximately 5,000 rabid animal cases are formally reported to the CDC every year and more than 90% of those cases occur in the wild.

Recently, shocking video of what appeared to be a rabid raccoon attacking a young girl outside her home in Connecticut surfaced. The girl and her mother ended up beginning a rabies vaccine series which consists of four total vaccines over the span of about two weeks.

Most humans are able to recover once receiving immediate medical attention; the same cannot be said for animals.

Rabies is a preventable viral disease, part of the Mononegavirales family, which can be transmitted to a person after they have been bitten by a rabid animal.

Animals — usually wild and often not domesticated — that become infected with the rabies virus suffer damage to their central nervous system, according to the CDC.

The virus will cause disease in the brain of the animal and eventually death.

Animals that are commonly reported for rabies cases include bats, raccoons, skunks, and foxes, but it is possible for any mammal to become infected with the virus. 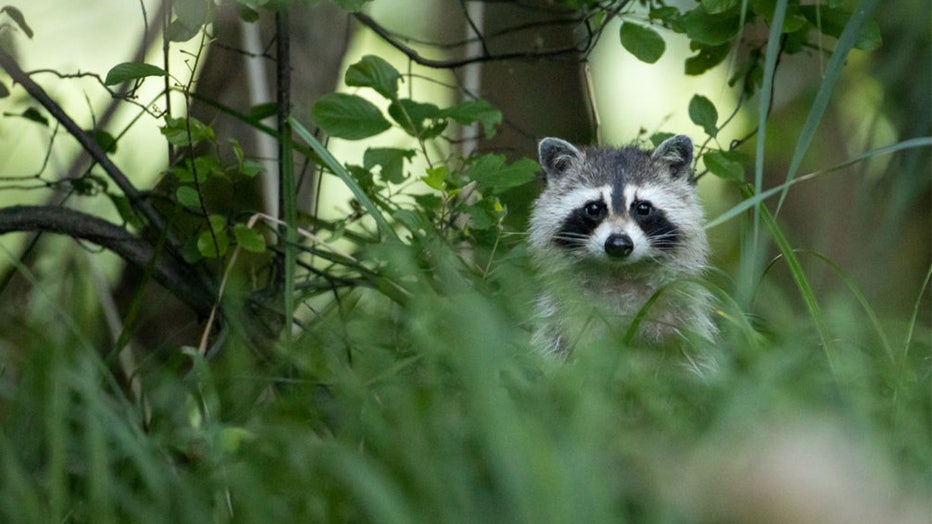 FILE - A raccoon peaks over the tall grass as it looks for food. (Ingolf König-Jablonski/picture alliance via Getty Images)

"Contact with infected bats is the leading cause of human rabies deaths in this country; at least 7 out of 10 Americans who die from rabies in the US were infected by bats," according to the CDC.

While very rare, rabies in humans that goes untreated is almost always fatal, according to the CDC.

The first symptoms of a rabies infection in a person start off similar to the flu. The infected person may experience weakness, discomfort, fever, or headache. And depending on where the person became infected, whether it’s a bite or a scratch, they may experience some prickling or an itching sensation at the site.

These early symptoms usually last for a few days, the CDC website states.

As the virus progresses, the person may experience anxiety, confusion, and agitation and it will continue to worsen from there.

The virus will eventually lead an infected person to exhibit delirium, abnormal behavior, hallucinations, hydrophobia (fear of water), and insomnia.

Once these acute symptoms of rabies begin to appear, it is almost always fatal and medical care that is received beyond this point is usually just supportive, according to the CDC.

Less than 20 people are known to have survived a rabies infection without receiving the vaccine series.

Rabies infections are usually transmitted from a wild animal to a human via a bite. It is also possible for people to get rabies through non-bite transmission such as a scratch or getting infected saliva in an open wound, but this is very rare, the CDC said.

It is also possible for rabies to spread through the air but this is also extremely rare and usually only lab workers are prone to this sort of exposure.

It has also been recorded that some people have become infected with rabies after receiving an organ transplant from an infected patient, but again, this is very rare.

Also, the rabies virus becomes noninfectious when it dries out and when it is exposed to sunlight, according to the CDC.

For anyone who owns pets that like to wander the outdoors, getting a rabies shot as a preventative measure is a common practice and is often required by law.

However, for those who have not vaccinated their pets or other domesticated animals with the rabies vaccines, there’s almost little to nothing that can be done once the animal has become infected.

Depending on your state’s ordinance, a pet that has been infected with rabies will either need to be euthanized immediately or kept in isolation for several months before a decision can be made to put the animal down.

For most people, coming into contact with infected wildlife is rare and the typical course of action, if one does get bitten by a rabid animal, is to receive a series of rabies vaccines, also known as postexposure prophylaxis (PEP). This course of action must be taken between 24 to 48 hours after a bite or attack.

The PEP consists of a dose of human rabies immune globulin (HRIG) and rabies vaccine given on the day of the rabies exposure, and then a dose of vaccine given again on days 3, 7, and 14.

But there are some exceptions for humans to receive a rabies vaccine series before potential exposure and that usually includes people who work directly with animals and wildlife or have to travel to parts of the world where medical attention is sparse and wild animals are common.

This vaccine series is known as pre-exposure prophylaxis (PrEP) and depending on how high-risk a person’s exposure level is, they can receive anywhere from two doses every six months to receiving a booster dose every three years.